Jackie Wong of Rocker Skating wrote a great post about how Four Continents is used in the selection process for the U.S. World team—and how it’s pretty complicated. Between reading his insightful post, and then watching some performances at Four Continents that paled in comparison to Nationals, I’ve been thinking a lot about “nationals hype.”

Excitement after a great U.S. Championships performance is certainly appropriate and deserved, but sometimes I think we can go overboard, christening a skater as the next big thing before they’ve had a chance to really prove themselves. The competition that follows Nationals should carry more weight for world team selection.

Amidst all the well-deserved excitement over Nathan Chen’s historic five-quad performance, Vincent Zhou also made a splash at U.S. Nationals, with some quads of his own and the silver medal. It  was a bit of a surprise, after a rough Junior Grand Prix series and an injury in the fall.

But he followed it with a win at the 2017 Bavarian Open, and his program included a gorgeous quad lutz. By all appearances, Zhou was able to harness that momentum and use it for his next competition.

Context is important here, of course. He was at a much smaller event (note the empty stands in the video), partially because he still needed to get the minimum technical score to be eligible for senior worlds (he is the first alternate). Next up for Zhou is the World Junior Championships, which is on a much larger stage, so we’ll see how he fares. 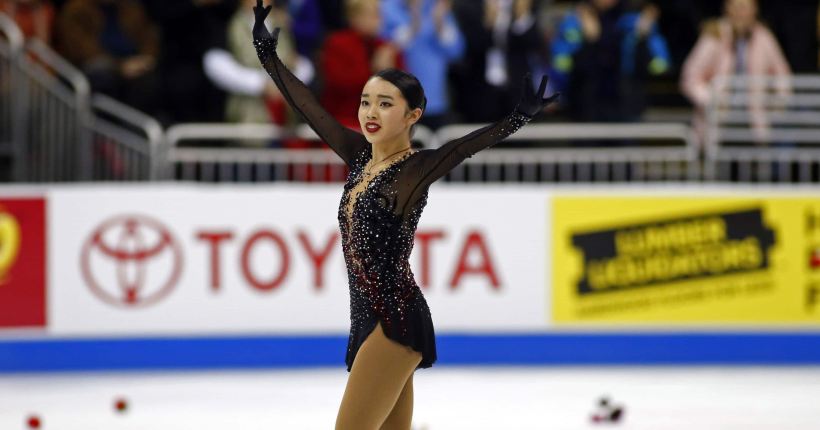 On the flip side, we have Karen Chen, who followed up two glorious performances at Nationals with a 12th place showing at Four Continents. She didn’t even get a mention in the Ice Network article about the competition; the U.S. Ladies Champion, completely out of the conversation at her next event.

Now, I understand that everyone has bad days on the ice. Maybe what happened to Chen this week at Four Continents was an anomaly. Maybe she’ll go out at Worlds, blow us all away and help earn three spots for the U.S. ladies at the Olympics. But based on a recent Instagram post, it looks like the injury and boot problems that plagued her throughout 2016 might be back. It sort of begs the question of whether fans, judges, everyone got a little too excited after Chen’s win in Kansas City.

Unlike Zhou, she wasn’t able to translate her Nationals success into an impressive showing on the international stage. Besides her 2017 title and a bronze at the 2015 U.S. Nationals, Chen hasn’t risen to the occasion in international events.

After Nationals, I wrote about how mentally tough I thought the U.S. ladies are, and that I had high hopes for Worlds. After this event, I have to say that I’m a little more nervous than hopeful.

Especially since Mai Mihara grabbed the gold at Four Continents. She looked like a sweet, consistent junior skater when I saw her at Skate America this fall, but this win proves that she is going to be another force to be reckoned with on the world stage.

The inflation of scores at national championship events is oft-discussed and oft-maligned among skating fans, but this goes beyond numbers to me. Chen was heralded as a contender for worlds, based on one event. Zhou, on the other hand, was seen as somebody who had a good day, but needed more room to grow, passed over for the more experienced Jason Brown on the world team. [Note: I think Brown was the right choice for the world team, I’m just pointing out the discrepancy.]

I think we ought to reserve judgment until a Zhou-like outing, where a skater proves that an electric Nationals performance wasn’t a one-time thing. Success at U.S. Nationals, or any country’s national championships for that matter, does not always translate in higher pressure, primetime events.

There’s lots of talk out there on the internet that maybe Karen Chen or Mariah Bell should be removed from the world team, after their subpar Four Continents performances, in comparison to their U.S. teammate Mirai Nagasu’s career-best long program and bronze medal.

It is certainly a valid discussion as the “body of work” criteria becomes more important and prevalent in the selection process for the world and Olympic teams, as opposed to just placements at Nationals. I’d be in favor of adopting something similar to the Russian system, where skaters have to prove themselves at multiple events to be named to a world or Olympic team—the U.S. is already inching its way in that direction with the new selection criteria.

This way, the U.S. would send skaters who’ve proven themselves over multiple events, in pressured situations, and ideally set themselves up for more success at worlds or the Olympics Games. And the skaters themselves would have multiple opportunities to prove their mettle.

Until then, the U.S. will be sending some “wild card” skaters, with high hopes of earning three Olympics spots, to Helsinki next month.

3 thoughts on “Nationals Hype and The Next Competition”