Whew, somehow it is 2020 and National Championships season in the world of figure skating. Japan and Russia kicked it off at the end of December, and Canada and the U.S. are up next, in terms of the major players. As we look at the season so far, I’ve got some observations about the current skating landscape, and some suggestions, because I can’t help myself. Here’s what we’ve learned so far this season:

Fire Power in the Short is Tough to Beat

A clean triple axel in the short program can overpower a multi-quad long program. Alena Kostornia’s superb triple axels are putting her so far ahead in short programs that she isn’t at a huge disadvantage without a quad in the free skate. It’s how she won the Grand Prix Final, and her two Grand Prix events this season. She was second to Anna Shcherbakova at Russian Nationals this year, so it isn’t an infallible strategy, but with three triple axels and her superior skating skills, it is possible to top the quad jumpers among her fellow Russians. Now, this advantage will disappear quickly if the ISU votes to allow quadruple jumps in the women’s short program, which I believe will be up for vote at the 2020 ISU Congress.

Balanced Skating is Still Rewarded (But Not Enough)

I’m going to turn to the Russian ladies again in this example. Kostornia gets in the high 8s and low 9s for her program component scores, while Alexandra Trusova is averaging in the low 8s. Kostornia’s higher marks are completely deserved – she has better flow across the ice, and more extension and toe point in her strokes and pushes, whereas at times it seems like Trusova does a series of pumps to get speed and then launches into her jumps.

But almost across the board in singles, I keep noticing major gaps between the technical element score and the PCS score. A skater like Trusova, who relies on her jump content, can have a 20-30 point difference in the TES vs. PCS, with the TES much higher because of how the scoring system factors each segment into the total score. But even Nathan Chen, who has been lauded for his artistic strides in recent years, had a huge difference in his TES and PCS scores in his Grand Prix Final victory. Because of his incredible quad content (five at that event), his TES was 33.36 points higher than his PCS, which were all high 9s (out of a possible 10). There needs to be a change in the way that PCS are weighted in the final score, because the current setup does not give equal weight to technical and artistic feats. And since this is figure skating and not jump skating, both need to be given equal importance. Notice that I am not saying to de-value quadruple jumps (which are incredibly difficult and should be rewarded as such). I just think we need to balance out the scales a bit here by increasing the value of high PCS scores in the overall total.

I also think this would be more effective than an age limit in terms of the current controversy over young skaters doing multiple quads and how that may or may not affect their future health. There definitely needs to be more study on that point, because we really only know things anecdotally now. Until that can be done and an age limit proven as a way to support the future health of skaters, I think fixing the IJS (again) could help. Plus, it avoids a scenario where people can complain that a skater was held back by an age limit during his or her prime. This type of change would give them incentive to work on having a complete package over jumps alone, which could also help with the toll that quad jumps take on the body by limiting repetition a bit.

In citing all those PCS marks above, and just looking at judges’ scores throughout the season, what kept jumping out at me was how willingly and frequently judges are handing out high 9s and 10s in the PCS. To me, those types of marks should be rare and well-deserved, for the likes of a Kwan or a Gordeeva/Grinkov, a bit like the old 6.0 perfect mark. Not handed out because a skater landed multiple quads, or is competing in his or her home country. Clean quadruple jumps also shouldn’t automatically lead to a 9.75 in skating skills. Sure, they can go towards the performance segment of the PCS mark, because a clean skate certainly elevates the performance quality, or composition, because a program that is well-crafted but includes multiple falls should be docked a bit, just as a clean program gives a more well-composed overall picture. But, judges, let’s save the 10s for historic moments, like Virtue/Moir at the Olympics, or true excellence, like Hanyu’s transitions.

Now it’s time to get down off my soapbox and go watch episode four of Netflix’s figure skating series, Spinning Out. I’ve got some thoughts on the show coming for a later post…stay tuned!

All score research compiled via SkatingScores.com, an excellent resource for skating fans and followers who want to get into the details of the scoring system and event scores.

Correction: An earlier version of this post erroneously reported that Kostornia was 3rd at Russian Nationals in 2020 and the post has since been updated to reflect her 2nd place finish.

The 2018 Grand Prix season is upon us! It feels like things are back to normal with Skate America kicking off the Grand Prix series as usual, unlike last year, when it was the final event. During the Grand Prix this year, I’m planning a Flashback Friday series where I will share a memorable performance from years past at each Grand Prix, on the Friday the competition kicks off.

This gem of a flashback video not only includes Kwan’s long program, which clinched the gold, but some awesome behind the scenes shots and interview clips about her freshman year. Check it out:

Will Chen fare as well as Kwan did? He had a rough outing at Japan Open a few weeks ago and will be looking for a cleaner skate here. It all kicks off Friday night!

Sometimes I let my personal favorites get in the way of all logic and reason when it comes to figure skating. So I’m predicting the 2017 Worlds results in two sets: sentimental vs. rational. See the full explanation in my initial post with ice dance predictions.

The men’s event is full of skaters tossing off quads left and right. It’s going to be awesome. I’ll never forget watching the final warmup group, live at Worlds in Boston last year, and being completely blown away by quad after quad, and the incredible quality of the jumps. If you’re going to be in Helsinki this year, I’m both super jealous and thrilled for you. Here are my thoughts on this quad festival: 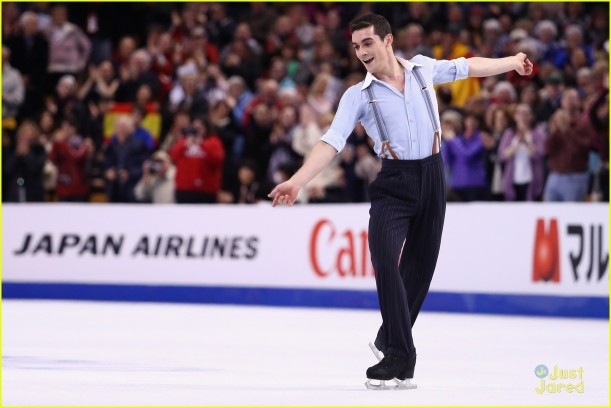 Last year at Worlds, Javier Fernandez held the audience in the palm of his hand during the long program. Stellar jumps, all delivered with this pizzaz and ease that made it seem like he was doing an exhibition program. I loved it, I love him, and I want him to get his third World title this week. I also have so much admiration for Nathan Chen’s poise under pressure and commitment to pushing himself. I’ve got him in second in my sentimental picks because of my love for Javi, but let’s be honest…I bet he will run away with this title. He’s been riding some excellent momentum since the Grand Prix Final and just seems to do better with each outing. And as Phil Hersh pointed out in his IceNetwork preview, Fernandez’ quad content doesn’t quite measure up to some of the other top guys. So my rational podium has two Japanese men, Yuzuru Hanyu and Shoma Uno. And not just because of their stellar quads; these guys have the whole package.

P.S. It is also Nathan’s first World Championships. When was the last time anyone won in their first try? Let alone the last U.S. man to do that? Google sleuthing didn’t help me out on this one, so if anyone knows, leave it in the comments! We can just call it pulling a Medvedeva in the meantime, since she won 2016 Worlds in her first year at the senior level.

Much to my delight (because figure skating and Hamilton are two of my top obsessions), this video was floating around the internet during Nationals last week:

Philip Baker, of the Skating Club of Boston, won bronze in the intermediate men’s division at the 2017 U.S. Figure Skating Championships with this program. The video above is from the New England Regional Championships, because the Nationals one isn’t available on YouTube. But someone wonderful brought it to the attention of Lin-Manuel Miranda on Twitter, which brought it to my attention:

AHHH. My love of figure skating and @HamiltonMusical collide with @Lin_Manuel tweeting about a figure skater's program set to Hamilton! https://t.co/P0D2nhllGw

Personally, I was wondering if someone might jump on the Hamilton bandwagon in the dance event, with hip hop as one of the rhythms this year (Just me? Wishful thinking? Ok, fine.)

The music of Hamilton is so intricate that I don’t think it would translate well to an ice rink and a 2-4 minute program. That said, this is a pretty well-done cut. And not only does this kid have great taste in music, but he is a great skater, too. He has excellent knee bend and speed across the ice in his stroking, and his musical timing is on target. (Seriously. Sometimes even senior skaters don’t hit their movements on the proper accent of the music.)

Oh, and the straight line footwork sequence is to die for: that fist pump on the lunge!

Let’s keep an eye on Baker, shall we? This might be the next cute youngster promo they show at senior Nationals someday, a la Nathen Chen last weekend:

Even when he was a 10-year-old, @nathanwchen had his sights set on the 2018 Olympics.

See him skate tomorrow night at #USChamps17 on @NBC. pic.twitter.com/XQHoPtH3KC